Get the latest news and insights from 21st Club

How many players do we need?

Implicit in all the decisions around player trading and youth promotion is a prediction about the depth of squad needed to compete during the season. Some clubs hope to go deep in all competitions, others are content at prioritising the league.

Given the average footballer’s annual pay is a deeply material cost to the club, it makes sense to consult the data to see how many players have been historically needed, by club circumstance.

The table below shows the average number of outfield players who played at least 900 minutes – the equivalent of 10 matches – during a season, according to the number of matches that team played in a season 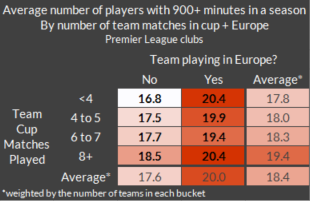 With the winter transfer window on the horizon, it’s worth asking: given our circumstances, how many players do we really need?